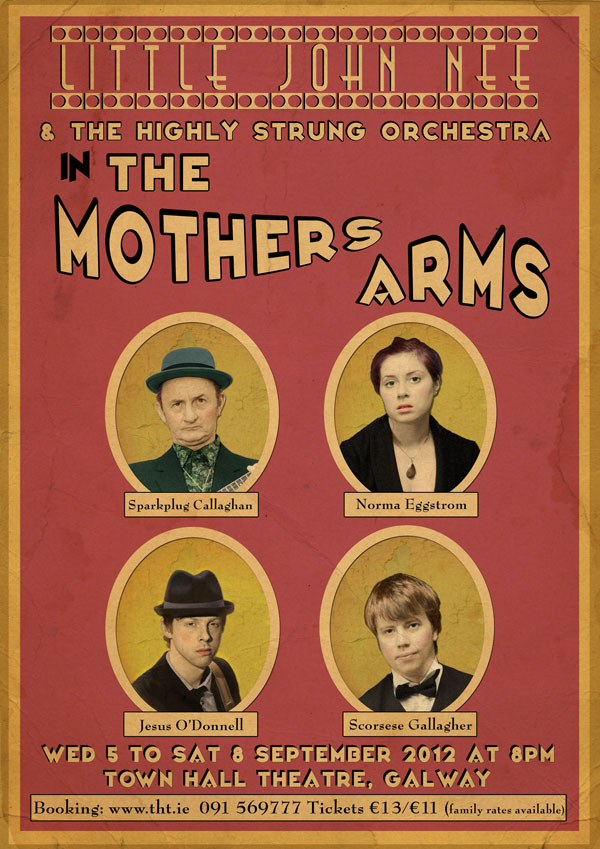 Up in the hills in the middle of nowhere…a dilapidated two story building surrounded by tumbling sheds; dry stone, rusty tin, rotting timber and tar-paper, the yard surrendered to weeds…this is The Mothers Arms Singing Lounge…

Little John Nee first drew attention to “The Mothers Arms Singing Lounge” in his show “Dead Rooster Blues”. The previous proprietor has recently gone to prison and his daughter Rose has returned from a failed marriage in the Florida swamps to run the place, but the debt collectors are circling like vultures. It’s been a long time since there was any singing here. On a beautiful summers’ morning a vintage automobile struggles up the hill, driven by Taxi Mc Dermott founder member of “The Caledonia Highly Strung Orchestra”.

This new show, a mixture of music and storytelling is a comic musical helter-skelter ride through a surreal but frighteningly believable rural gothic landscape.

Jeremy Howard, an avid music performer and composer, completed his degree in Electro-acoustic Music Composition in Staffordshire, and masters in Film Composition at the Bournemouth Screen Academy. Now works as both a film-maker and sound-track composer, working on various feature films and animations in Ireland, the UK and Taiwan..

Órláith Gilcreest is a singer and multi-instrumentalist she plays in a variety of music ensembles, playing jazz, rock, folk, blues, and classical she is currently studying at Trinity College Dublin.

Fionn Robinson is a qualified Music Therapist working in Co. Donegal, Ireland. He recently completed a Masters in Music Therapy and is currently working with adults and children with intellectual and developmental disabilties

Andrew Galvin is a poet, playwright and performer. He is a founder member of Babalon Theatre Co. and has written two plays, “The Crowning Glass” and “The Fool & the Moon”