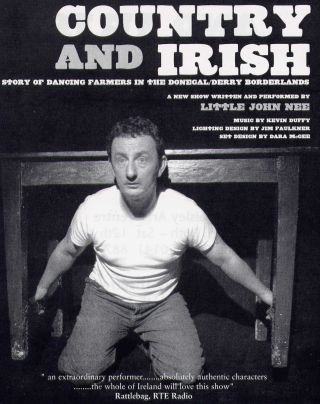 A tale of dancing farmers in the Donegal/Derry borderlands

Set in present day we meet our hero in his farm kitchen as he readies himself to go to a dance class and are spun back in time with visions of U boats invading Derry and Adolf Hitler installed in the guild hall. This story is set in a country kitchen that is still a meeting place for beautiful rural eccentrics who delight in the telling of yarns. It recounts the excitement of his father on a visit to Derry in !944, a city vibrant with allied soldiers and the latest jazz music, and his own journey as “wee satchmo” son of a jazz farmer

“i thought i was sophisticated…till I went to secondary school and found out I was a “cultie”. A redneck, a hillbilly. But I cultivated the fertile fields of my imagination while the town boys tended the narrow window boxes of their prejudice” 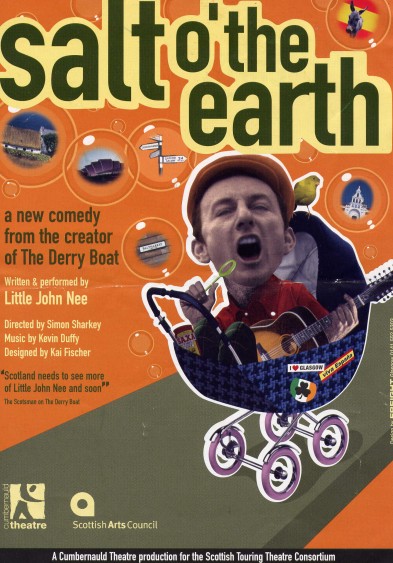 IF Little John Nee’s follow-up to The Derry Boat is a statement of intent on the part of the Scottish Touring Theatre Consortium, as the publicity from Cumbernauld has suggested, then it is a potent one. Director Simon Sharkey has found a kindred spirit in the Donegal Glasgwegian who draws on his life for this tale of Johnny Bonnar’s journey from Glasgow’s Saltmarket to Eire and points across Europe. Yup, it is that nostalgia/diaspora thing that underpins a lot of the programming at Glasgow’s Pavilion, but here presented with innovative wit and inventive staging in a one-man performance of great charm. It is assuredly a Celtic trait not to feel patronised by a sentimentalised version of our collective past and, although it might be argued that theatre of this form is archaic, if the aim of the consortium is to reclaim a populist style, then the best of luck to them. To be fair, Salt o’ the Earth becomes more than its initial scenes suggest. The scattergun approach of including wider historical references (the assassination of JFK, the Spanish Civil War) is effective chiefly because of a casual disregard for chronology. Threads of Bonnar’s life are left unresolved, just like life, but rare in this sort of drama. After the interval the tale becomes an incredible travelogue (with a nod to Esther Freud’s Hideous Kinky) and much more one man’s journey than a tapping into history. Nee keeps these strands flowing with skill, integral music (with Kevin Duffy), but perhaps too many props. Touring to Paisley, Kilmarnock, Bathgate, East Kilbride, and Livingston to the end of the month.